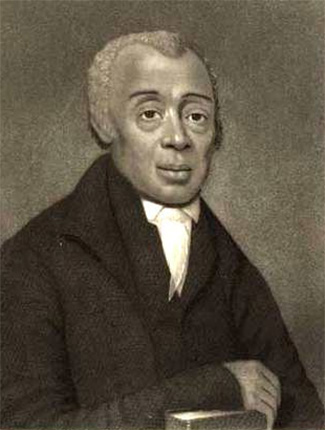 In 1787, Reverends Richard Allen and Absalom Jones withdrew from the St. George Methodist Church because of "unkind treatment" and restrictions placed upon worshipers of African descent. They founded The Free African Society, which was the beginning of the African Methodist Episcopal Church.

In 1816, Richard Allen called together sixteen representatives from Bethel African Church in Philadelphia, and African Churches in Baltimore, Maryland; Wilmington, Delaware; Attleboro, Pennsylvania, and Salem, New Jersey, to meet in Philadelphia, Pennsylvania. A church organization or "connection" was organized as the African Methodist Episcopal Church. Richard Allen was the founder and first Bishop of the African Methodist Episcopal Church.

The name of our Church is the African Methodist Episcopal (A.M.E.) Church. In order that you might have a clear understanding of what each word in the name of our church means, the following brief comments are offered:

In the year 1787 Richard Allen, our founder, and a group of dark-skinned Americans of African descent were forced to organize themselves into a separate group for their own spiritual, social, educational and general growth and development. At that time, African American had not yet come into general use in reference to those of us who are now called Afro-American. All of our ancestors of that day were referred to as simply Africans. This particular group of Americans of African descent, under the leadership of Richard Allen, constituted the first and founding members of our church.

Our church is a member of the family of Methodist Churches. Richard Allen, our founder and first active bishop, felt that no religious group or denomination would suit the capacity of his people as well as did Methodism. He was impressed with its emphasis upon the plain and simple gospel which the under-developed needed. He felt that Methodism had what we needed to encourage us to make progress, to worship God freely, and to fill every office which was available in church and in our total community.

The word "EPISCOPAL" refers to the form of government under which our church operates. The episcopal form of government means that the chief executive and administrative officers of our denomination are our Bishops. Their authority is given them by the General Conference.

Stated briefly, their responsibilities are to oversee the spiritual and temporal affairs of our church, including presiding over annual conferences, making pastoral appointments, ordaining deacons and elders, organizing missions, and generally promoting the interest of the denomination.